During the Q Improvement Lab (Q Lab) pilot project, the Q Lab carried out a nationwide survey on decision-making in peer support; we believe it to be the biggest peer support survey in the UK. It provides valuable insights both about the current awareness and uptake of peer support, as well as new information about what matters to people when deciding to either access peer support or refer/recommend peer support to others.

This essay describes why and how we did this research before presenting the full set of findings and how they might be used by people working in or with peer support services.

Why is this peer support survey important?

Supporting and enabling people to access peer support can be challenging. The Lab identified a range of issues linked to this including: lack of information about available services, low referral rates from health care professionals, and poor uptake due to personal, social and cultural barriers or a belief that peer support will not help. (Read the Learning and insights on peer support essay for further information.)

When we explored some of these access issues further, we identified that there was little research that sought to understand what really matters to people when deciding whether to refer to or use peer support. By understanding what influences people’s decision making around peer support, we can make progress on some of issues with accessing peer support as listed above.

Who and what did we ask?

We asked each of the three groups below to think about what was most important to them when making decisions around peer support.

The public: We asked them to think about what was most important to them when deciding to use peer support. Peer support is unlike many other clinical interventions in that it is available to all without a prescription. As potential users and beneficiaries of peer support, it is crucial to understand the viewpoint of members of the public.

A study has recently been carried out in the United States which used novel analysis to assess the priorities of Republican and Democrat politicians in relation to national health policy in the US.1 By using a similar approach we were able to identify the extent to which people disagree or agree on the importance of different policy goals, and therefore what issues might be most suitable for cross-party collaboration.

We thought these same methods could help us to understand the value of different factors to different groups of people in relation to peer support. We worked with Lab participants and other key stakeholders to design, develop and test the peer support survey. The main question in the survey asked respondents to rank a list of factors, from most important to least important, when they were either referring to, recommending or accessing peer support.

The list of factors was co-designed with Q Lab participants and covered a range of different priorities that were distinct, and would be applicable to the broad audience which the peer support survey targeted.

We tested the survey with Q Lab participants, members of the public and with people face to face at the UK-wide Q community event and Peerfest, an annual peer support festival. The testing phase highlighted the importance of clear, non-technical language as well as a concise list of factors to rank.

The final 12 factors were:

How we analysed the peer support survey responses

The final peer support survey contained seven questions. Six questions asked respondents about their role in and interaction with peer support, including whether they identified as having a long-term condition and other demographic questions. The final question was the ranking question, described above.

We conducted the survey in partnership with YouGov, and it was launched in December 2017. We collected 2,666 responses in five weeks. To our knowledge, this is the biggest peer support survey to be conducted in the UK.

All of the respondents were over the age of 16 and demographically representative of the UK population.2 The sample of the public was weighted towards those who identified as having a long-term condition – this is because we were particularly interested in their viewpoints as they are a population the evidence suggests might benefit most from increased awareness of and access to peer support services.3

The chart below shows the breakdown of respondents. 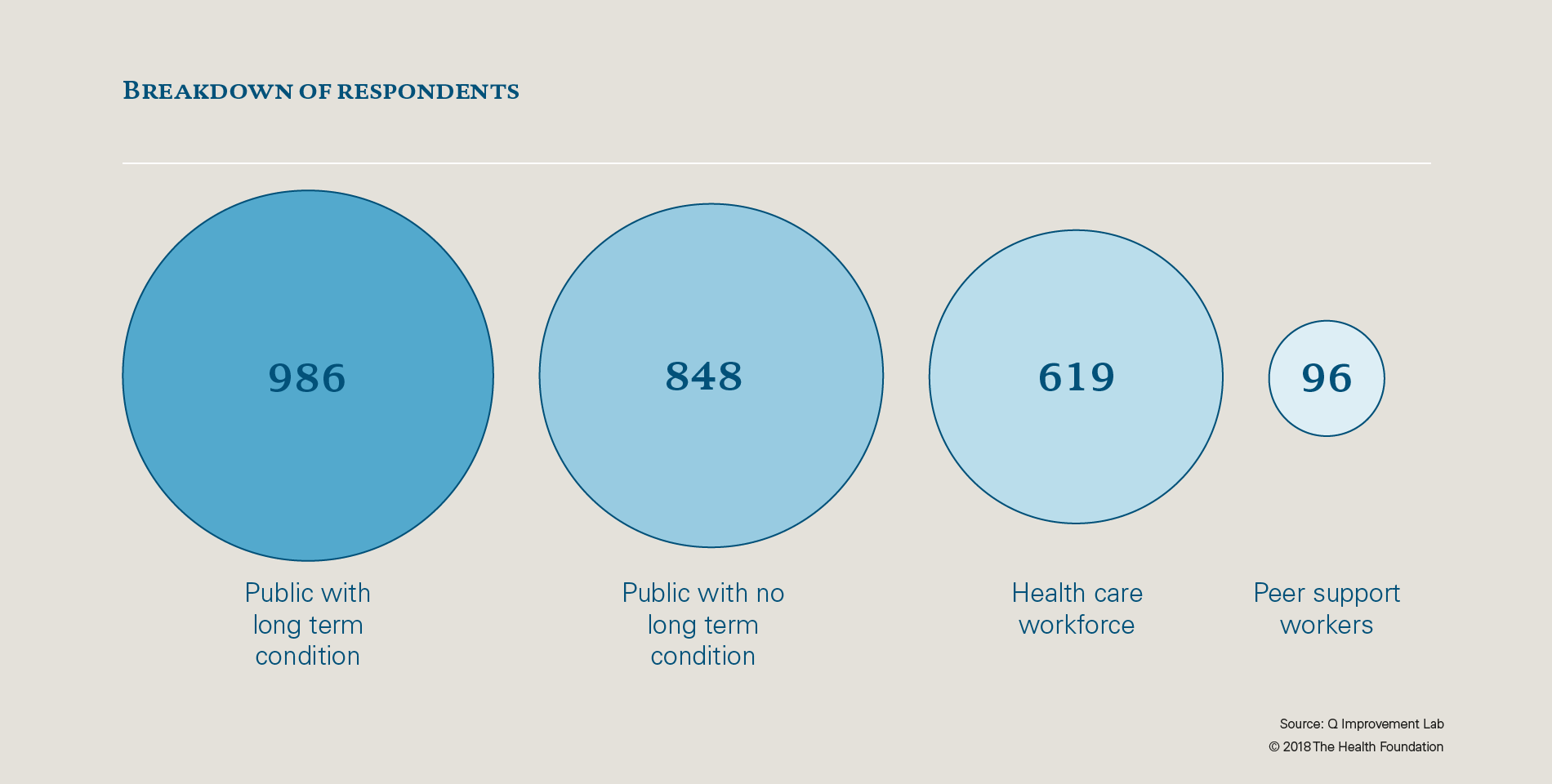 Conducting a peer support survey like this at scale has allowed us to learn more about people’s interactions with and utilisation of peer support at a national level.

Use of peer support by the public 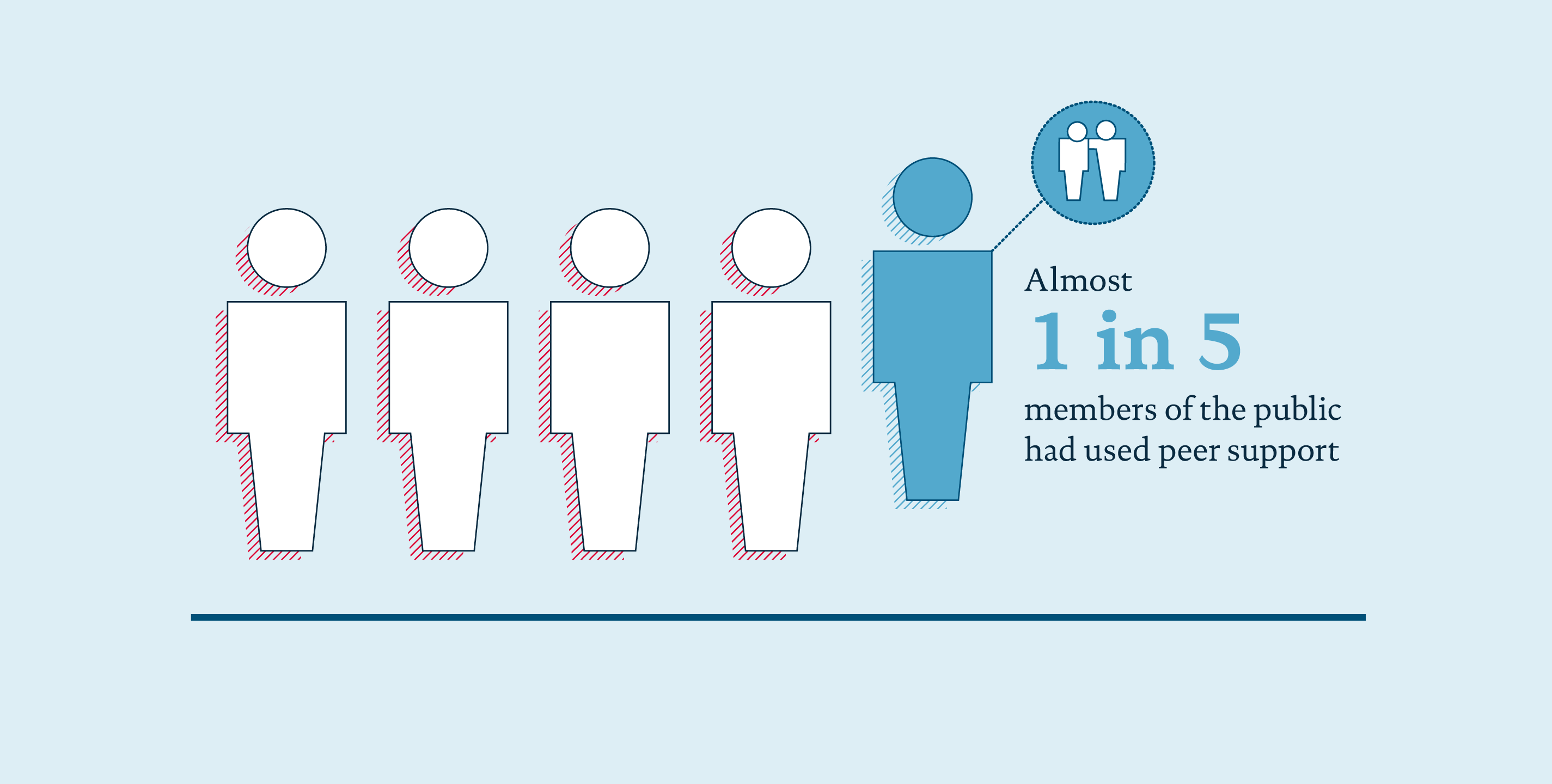 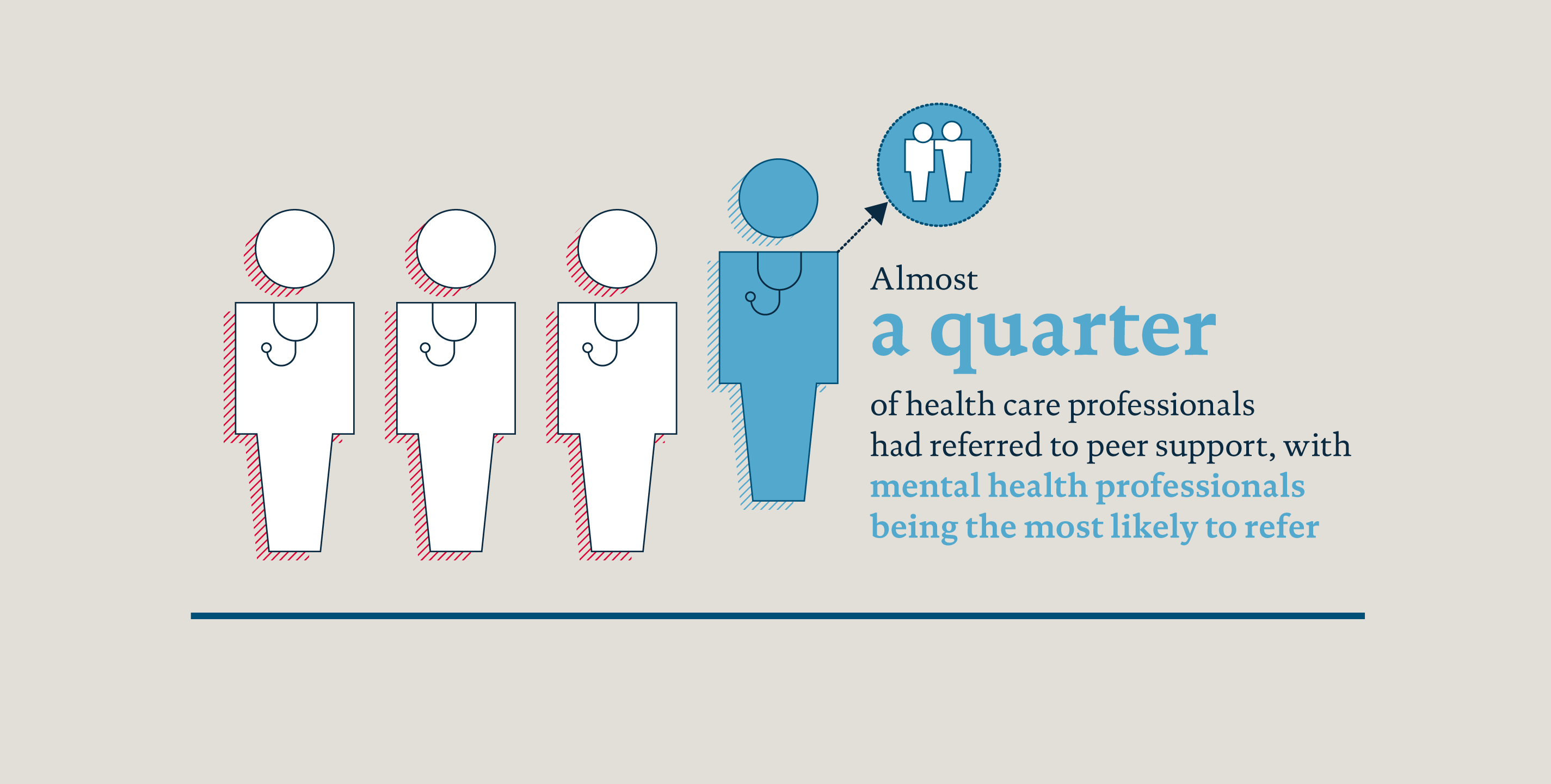 What did the different groups prioritise?

We were particularly interested in understanding whether different factors were important for the health care workforce, peer support workforce and the public. We also wanted to find out if people who had used peer support valued different things to those who had not, and whether having a long-term condition influenced what people thought was important.

When it came to those members of the public who had used peer support, our analysis found that an opportunity to meet people with similar experiences was now considered to be one of the top five most important factors. But the other five factors above all made it into the top six for this group. 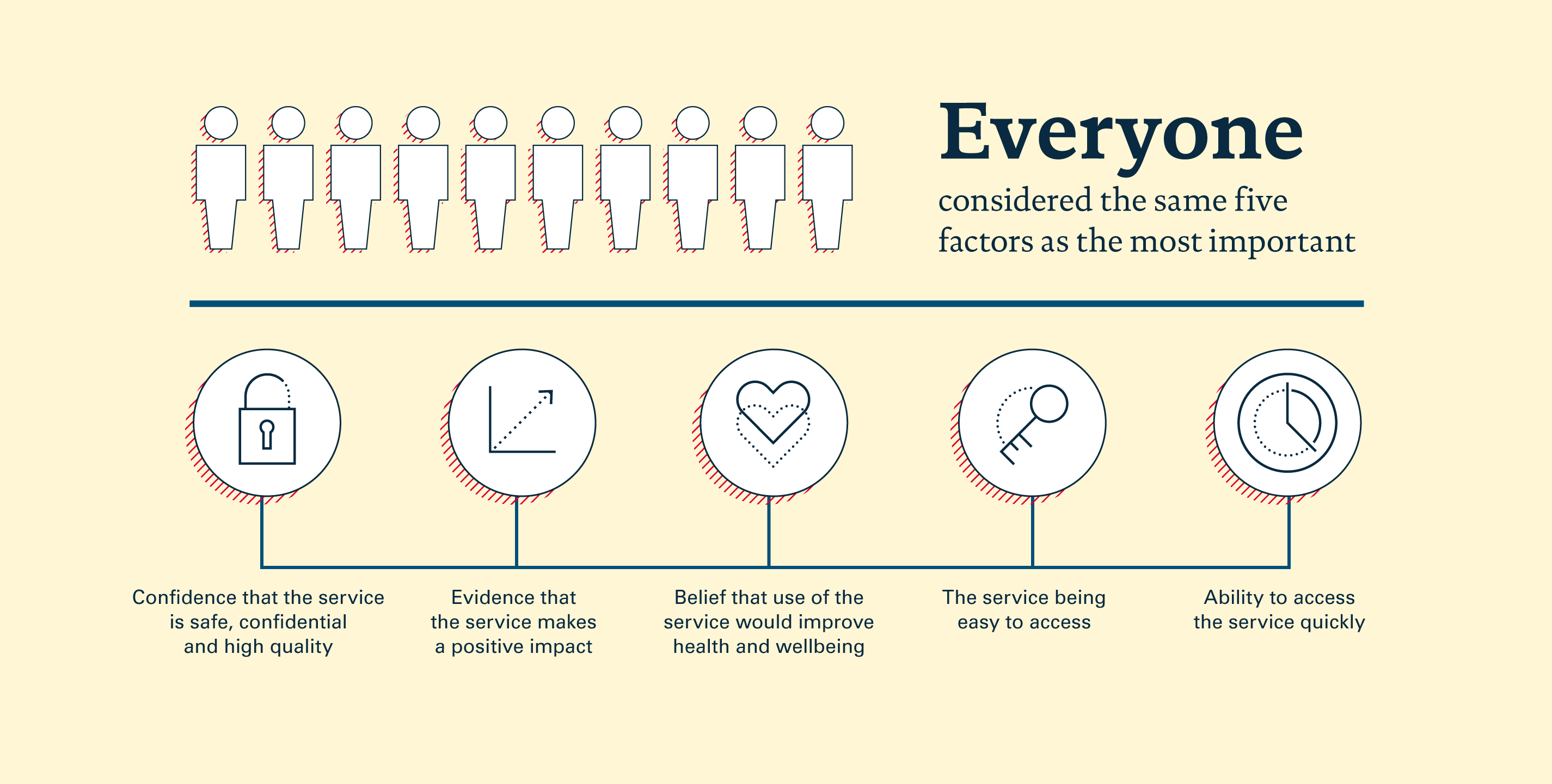 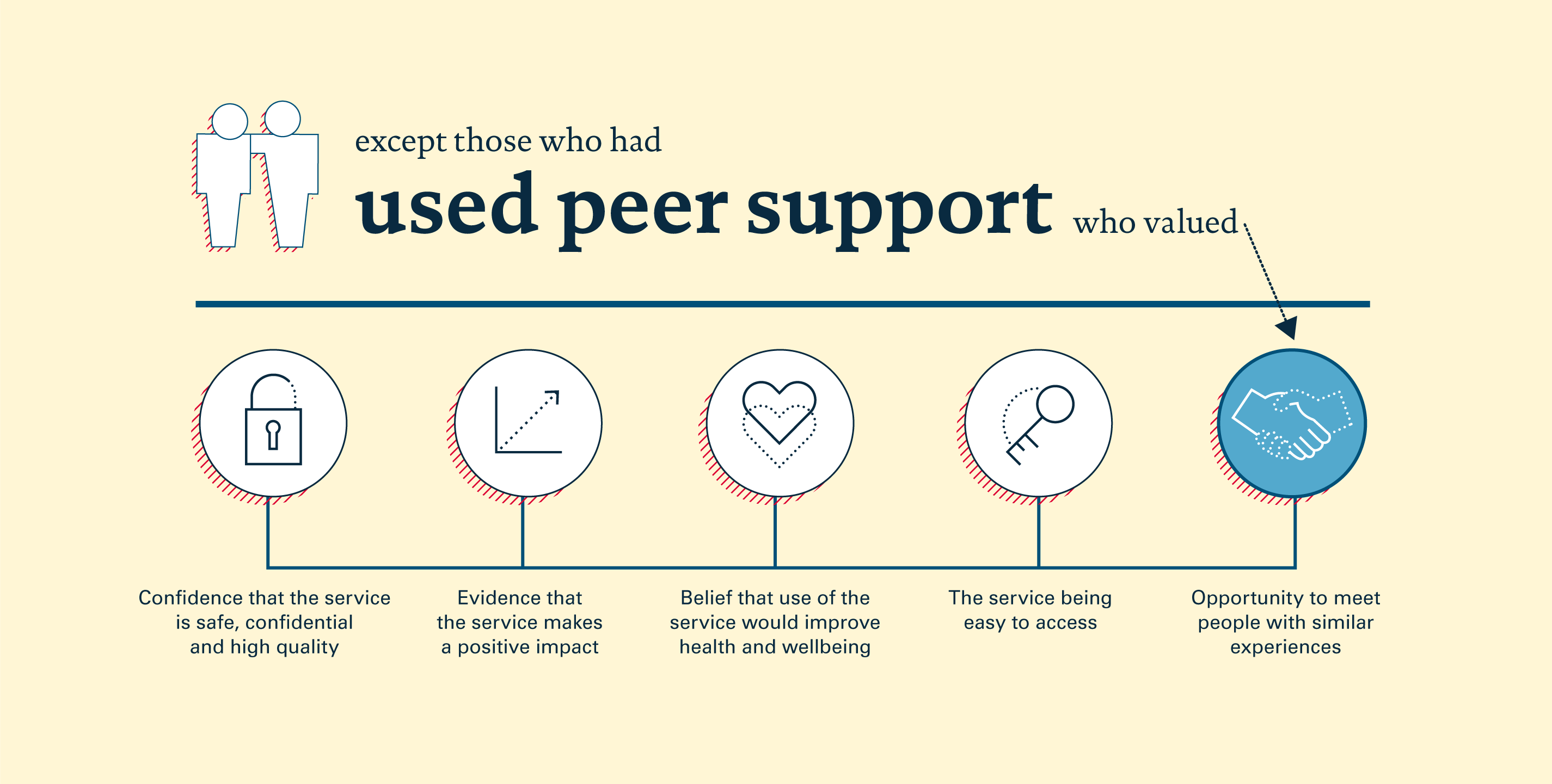 Those working in peer support felt that an opportunity to meet people with similar experiences and stories from people who have benefitted from the service were more important than members of the public or health care workforce did.

Members of the public who had used peer support think that the service being endorsed by a health care professional is less important than those who have not previously accessed it.

Reducing burden on the NHS was uniformly ranked across all of the subgroups as the least important factor when making decisions around peer support.

In addition to all of the above, our analysis did not identify a statistically significant effect of sex, location, age or ethnic background on what any group considered important when making a specific decision. 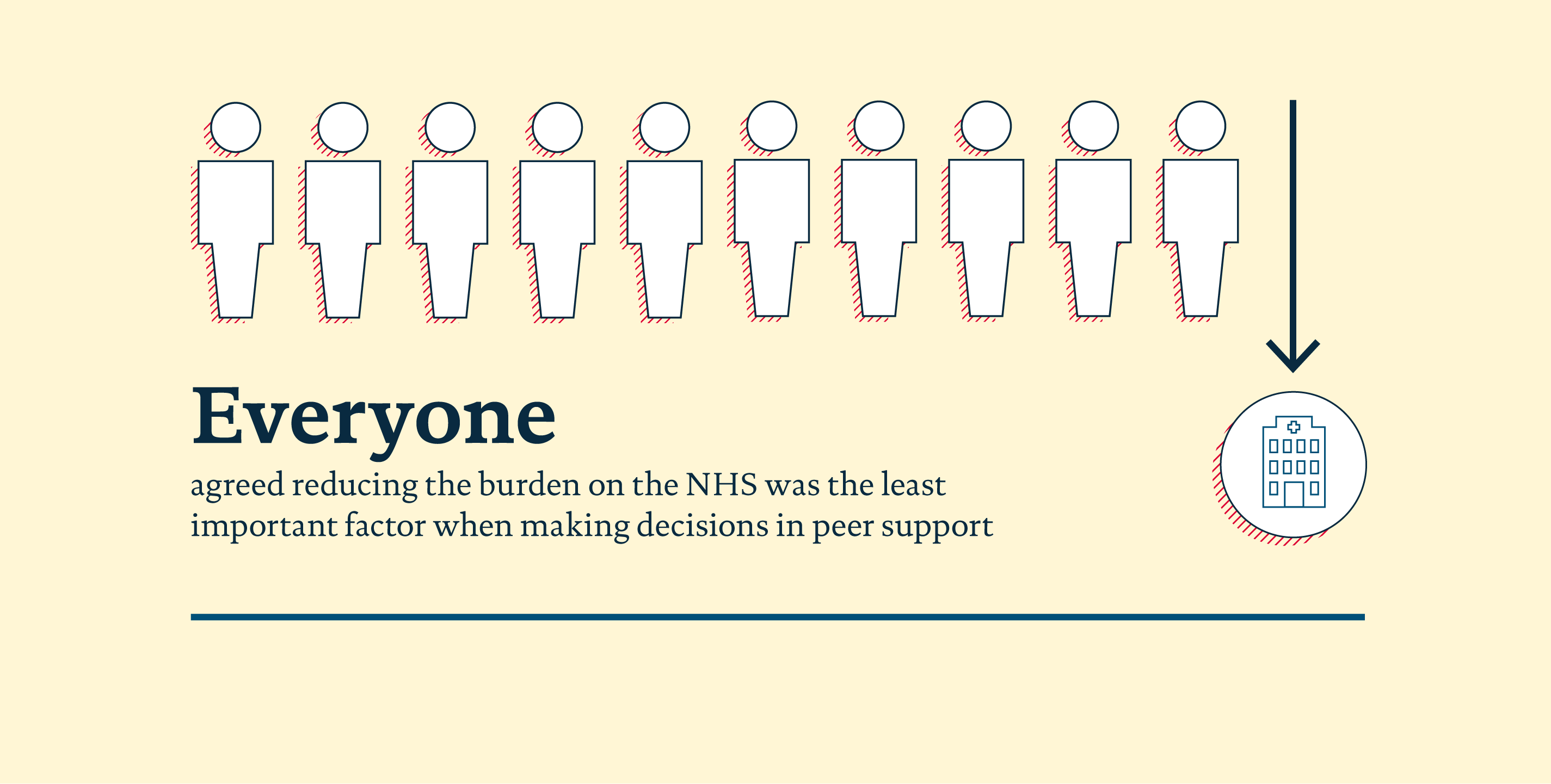 How these priorities interact

We carried out further analysis to give additional insight into the group rankings. We adapted a technique common in psychometric research to visualise the group preferences in a 2D “importance map” of the options and how they cluster together.

The clusters show factors that tend to be ranked similarly by people so that a single cluster of factors might represent a broader “priority” that contains each of the factors within that cluster. For instance, the cluster of “easy access” and “quick access” represents a broader priority of simply “good access”.

The importance maps show that there were some factors which clustered together in a similar way for the different sub-groups. Clusters of factors linked to personal connections, accessibility and health care system factors (such as reducing the burden on the NHS and ability to use alongside other services) came up multiple times.

For the health care workforce, three broad factors are important for referring to support: that it objectively works, that they believe that it will help and that it’s accessible. There were no differences for those who had referred to peer support compared to those who hadn’t. As the same things were important to those who had and had not referred, we might infer that unless all three factors are met, health care professionals will be less likely to refer people to peer support services.

This research has given us new insights, not only in terms of what people find important when making decisions around peer support but also about usage and referral rates. We think there are opportunities to use this new learning and apply it in practice to support the uptake of peer support services by those who could benefit from it.

During March and April 2018 we spent time working with Lab participants and other key stakeholders to think about how the findings could be used in practice.

The ideas, although wide ranging, could be collated into the following recommendations:

Some specific questions that might trigger further research are:

In addition to the recommendations outlined above, there needs to be energy and effort committed to spreading the findings from this research. The Lab community proposed several different and creative ways to share the findings such as animations, podcasts and posters. These could allow the key insights to be communicated in an engaging way and could provoke further conversation and reflection. Responding to some of these suggestions, the Lab has created infographics and key images for sharing via social media and other communication materials.

Lab participants suggested a range of organisations, charities and networks from around the UK to share these findings with. We will be working with our Lab community to spread and share what we have found over the next few months.

These new insights into peer support have allowed us to bring people together and stimulate conversations about how they could be used in practice to: communicate more effectively, increase buy-in and understanding, and contribute to improving access to peer support overall. This research only begins to scratch the surface of what could be learned about opinions and behaviours in peer support and we hope it provides a springboard for further work.

Limitations to the peer support survey

As with any piece of research, there are limitations to the work we undertook. We tried to collect a large enough number of responses from which to draw population level conclusions. In addition, we ensured that there were a sufficient number of responses from different national and black and minority ethnic (BME) groups to ensure the sample was representative of the wider UK population. However, a sample can never truly represent the viewpoints of all those in a population and some of the conclusions we draw may not be applicable to all.

Prior to launching the peer support survey we also carried out rigorous testing to ensure that the survey used easily accessible language, was succinct and easy to take part in. We included an explanation of what peer support is, to help people understand the questions better, and provided a link to a video which described and exemplified peer support. Despite those efforts, there is a chance that respondents to the survey misunderstood what is meant by peer support and what was being asked of them in the survey.

The survey was delivered in English and designed to be completed online via a computer, tablet or mobile device. Therefore, this study is limited to fluent or proficient English speakers who were able to take part electronically and does not represent the viewpoints of those who were unable to take part due to the language or platform that were selected.

The survey was intentionally short so that it was easy to complete and to allow respondents to focus on the main element of our research, the ranking exercise. As a result, there were many questions that would have been interesting to ask that were not included in the peer support survey. We hope that although this might be seen as a limitation, this could encourage people to take the research further by asking additional questions.

For any questions about the research methods or analysis, please contact the Lab team.

Learning and insights on peer support